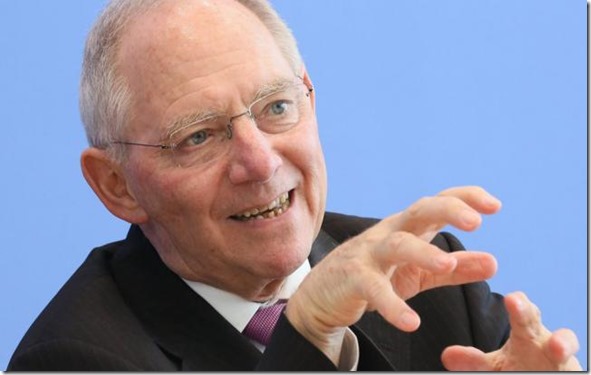 In my last post I cited extensively from Timothy Geithner’s memoir Stress Test to document that German Finance Minister Wolfgang Schäuble has always led the Grexit, “amputate the festering Greek leg” camp in the German government since at least 2012. And that the new Greek government may have been unwittingly playing into his hands the whole last five months. In any event it is disingenuous or seriously naive to wake up suddenly to this possibility only last Saturday, as Yanis Varoufakis did in The Guardian, a charge he is planning to repeat in coming Thursday’s Die Zeit.

In retrospect it is clear that a fiscally and statistically troubled Greece should never have been admitted to the Euro (and also that the Euro should never have been launched in the form it was). So there is some sense behind contemplating Grexit, even if it represents a rather impressive failure of due diligence and supervision on the part of the European Commission, but correcting an error may not mandate the same policies as not making it in the first place. But what I find almost more shocking about Schäuble is something else—his sense of what constitutes European solidarity and effective policy, for it reveals a level of economic illiteracy truly shocking in such a powerful finance minister.

In his memoir Geithner also recounts another conversation he had with Schäuble in 2010:

The most powerful country in Europe, Germany, was deeply committed to a strategy of austerity, and skeptical of forceful financial rescues. I had met Schäuble, a survivor of an assassination attempt that left him in a wheelchair, for the first time in Iqaluit, and I had found him compelling—direct, smart, strong. On substance, though, we were often far apart. He had a clear view: Greece had binged, so it needed to go on a strict diet. Other nations with unsustainable deficits had to do the same, even though it would cause pain for their citizens, even though many [in fact, all except Greece] had been fiscally responsible before the crisis. Schäuble said Germany would slash its own budget in solidarity with the rest of the continent, to show that it wouldn’t ask for sacrifices it wouldn’t make itself [my emphasis]. I thought that would just make the problem worse; in the near term, the German government and German citizens needed to do more spending and less saving.

“You know, you sound a bit like Herbert Hoover in the 1930s,” I said. “You need to be thinking about growth.” [Kindle edition position 6681]

That slashing the German budget could be an act of solidarity with the financially strapped rest of Europe is a vision of such abject economic ignorance that it leaves one breathless. Anthropologists call this style of reasoning “sympathetic magic.” Like voodoo, “sympathetic magic is based on the metaphysical belief that like affects like.” The Skeptic's Dictionary continues:

Anthropologists consider magical thinking a precursor to scientific thinking. It is indicative of a concern with control over nature through understanding cause and effect. Nevertheless, the methods of magic, however empirical, are not scientific. Such thinking may seem charming when done by our ancestors living thousands of years ago, but today such thinking may indicate a profound ignorance or indifference towards science and a testable understanding of the world.

Recall that in 2010 Germany was running a current-account surplus of over 5% of GDP. Its public investment rate was at an historical low. The share of labor in national product was historically low and falling. It was benefitting from unprecedentedly low interest rates as a safe haven in the crisis. Its substantial excess savings were (and still are!) flowing into its foreign trade surplus.

This does even qualify as an example of Keynes’ famous dictum

Practical men who believe themselves to be quite exempt from any intellectual influence, are usually the slaves of some defunct economist. Madmen in authority, who hear voices in the air, are distilling their frenzy from some academic scribbler of a few years back.

There is no academic scribbler behind such stupidity, it is just stupidity pure and simple. Hoover (actually his Treasury Secretary Mellon, although we have only Hoover’s word for it in his memoirs) may have advocated “liquidate labor, liquidate stocks, liquidate farmers, liquidate real estate... it will purge the rottenness out of the system,” but at least he might have been distilling this policy from the academic scribbler Friedrich Hayek (though this is unlikely, and Mellon actually pressed for lower interest rates). What excuse does Schäuble have? A schwäbische Hausfrau's common sense and an inability to understand the paradox of thrift?

Posted by Gerald Silverberg at 17:25