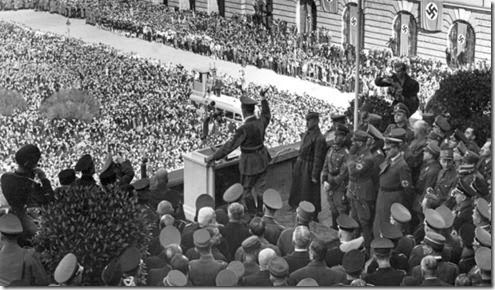 Putin’s speech announcing the annexation of the Crimea on March 18, 2014 (above, source: BBC) differed refreshingly from Hitler’s analogous speech at the Vienna Heldenplatz on March 15, 1938 after the Austrian Anschluss (below, source: Süddeutsche Zeitung): no wild gesticulating, the conspicuous presence of orthodox Rabbis and turbaned Imams in the audience.

But first, let us analyze why Putin chose to announce this watered-down and irredentist version of the Putin Doctrine to a captive Russian audience in the Kremlin rather than the full universalist Doctrine, as originally planned, in a Russia Today (RT) television interview, as we previously reported based on informants close to Edward Snowden. During an emergency session with his closest advisers on Monday afternoon, Putin was confronted with the following serious objections:
So what was this coded olive branch? Unremarked by most political commentators, in his March 18 speech Putin, after praising India and China for their restraint in the Crimea question, appealed to German understanding:


I believe that the Europeans, first and foremost, the Germans, will also understand me. Let me remind you that in the course of political consultations on the unification of East and West Germany, at the expert, though very high level, some nations that were then and are now Germany’s allies did not support the idea of unification. Our nation, however, unequivocally supported the sincere, unstoppable desire of the Germans for national unity. I am confident that you have not forgotten this, and I expect that the citizens of Germany will also support the aspiration of the Russians, of historical Russia, to restore unity.

But hidden in his introductory remarks is this obscure reference:


Everything in Crimea speaks of our shared history and pride. This is the location of ancient Khersones, where Prince Vladimir was baptised. His spiritual feat of adopting Orthodoxy predetermined the overall basis of the culture, civilisation and human values that unite the peoples of Russia, Ukraine and Belarus.

CIB Kremlinologists puzzled at first over this quasi mythological allusion until they connected it with the above statement about German reunification and realized that it represents a coded offer to return Königsberg to Germany in exchange for German recognition of the Crimean annexation. After all, Königsberg plays the same role in German history under the Teutonic Knights as Khersones in the Crimea does under the perhaps mythological Prince Vladimir in Slavic history, the one being the origin of the Christianization of the Prussian tribes and Lithuania, and the other of the Kievan Rus. At this very moment experts in the German Foreign Ministry are poring over this offer and whether it can be reconciled with Germany’s obligations to its NATO partners and its own checkered experience with irredentist self-determination. 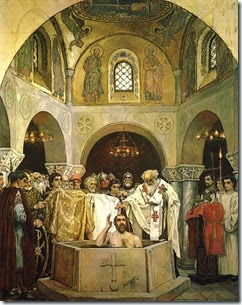 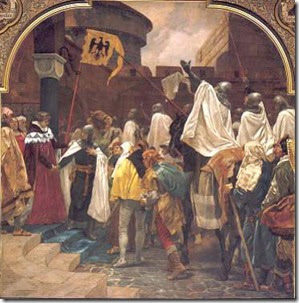 A medieval basis for Russian-German reconciliation? Prince Vladimir being baptized in Khersones in 988 (left), Emperor Friedrich II sending off the Teutonic Knights in 1236 into Prussia (right). (Picture source: Wikipedia Commons) 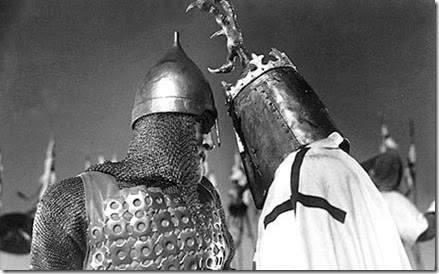 Or will a failure of Russian-German understanding lead to renewed tensions? Teutonic Knights preparing to invade the East. (Film still from Sergei Eisenstein’s 1938 masterpiece Alexander Nevsky. Source: The Guardian)
Posted by Gerald Silverberg at 18:56 1 comment:

Putin Doctrine to Be Announced with Chechen and Kaliningrad Referendums: CIB Breaking News!

Disturbed by the hypocrisy of the US’s refusal to recognize yesterday’s overwhelmingly successful referendum in the Crimea as an idealistic implementation of Wilson’s principle of national self-determination, Russian President Vladimir Putin is preparing to go a step further and enunciate a far-reaching Putin Doctrine, the Creditanstalt Intelligence Bureau has learned today from informed sources in Moscow close to American whistleblower Edward Snowden. The Putin Doctrine will bring the Brezhnev Doctrine into the post-Cold War world, and foresees a unilateral and universalist Russian policy of armed intervention to promote the self-determination of oppressed minorities in existing sovereign states.

To demonstrate that this doctrine is not merely a self-serving opportunistic policy of the Russian Federation, President Putin plans to announce snap referendums in Chechnya and the Kaliningrad Oblast for next Sunday. Putin considers it symbolic that the Putin Doctrine will be applied first to Kaliningrad (the former Königsberg), home of the great philosopher Immanuel Kant and his categorical imperative, which holds that a policy can only be right if it is right in universal application, and not selectively employed as is typical of the US’s use of the principle of self-determination (e.g., supporting it in Kosovo, denying it in Crimea).

In the case of Chechnya, Saudi Arabian Special Forces Units will be invited to occupy polling stations within the country to ensure free and fair elections. The population will be presented with the alternatives of independence or annexation by a future Islamic Caliphate. The possibility of remaining within the Russian Federation under the present constitution is not foreseen as a choice, in line with the design of yesterday’s Crimean referendum. The present Kadyrov government is no longer recognized as legitimate, having been installed by rogue elements of the Russian military in the wake of the Second Chechen War.

President Putin’s deep study of Eurasian history has convinced him that Königsberg as the seat of the medieval Teutonic Knights is the source of German national identity (very much like Kiev for Russians) and thus must be allowed to revert to German sovereignty after being illegitimately annexed by Stalin after World War II. Thus he will invite German Chancellor Merkel to immediately dispatch elite Bundeswehr KSK commandos to Kaliningrad to supervise Sunday’s referendum.

The Creditanstalt Intelligence Bureau has learned that the formal announcement of the Putin Doctrine will be made tonight at 21:00 by the Russian President on the Russia Today (RT) television channel in an interview with the RT’s star journalist Larry King (formerly CNN) and ex-German Chancellor and lavishly paid Gazprom adviser Gerhard Schröder. 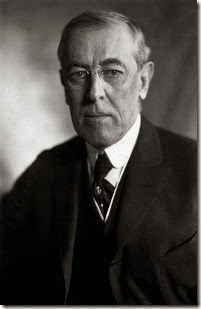 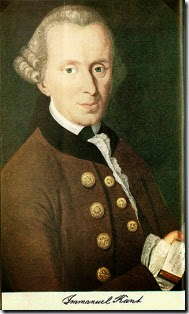 The Putin Doctrine will consistently live up to the high moral standards of US President Woodrow Wilson (left) in his Principle of National Self-Determination and the Categorical Imperative of Königsberg philosopher Immanuel Kant (right). (Picture source: Wikipedia Commons)
Posted by Gerald Silverberg at 11:49 1 comment:

On the occasion of Roger Hilsman's death on February 23 (only reported this week - see New York Times obituary), I'd like to return briefly to the evidence on whether John F. Kennedy would have escalated the war in Vietnam had he lived (see my November 23 post).

Roger Hilsman was the archetypical "best and brightest" in Kennedy's New Frontier, simultaneously an insider and outsider in the military/intelligence/foreign relations community, with first-hand experience of guerrilla warfare in Southeast Asia during World War II and a PhD from Yale. He epitomized all of the contradictions of the US's Cold War elite, advocating both extensive defoliation and strategic hamlets in South Vietnam while opposing the deployment of American combat troops and the bombing of North Vietnam. He was also the author of the infamous "Cable 243" in 1963 which some interpret as giving the green light to the subsequent overthrow and assassination of President Diem.

His 1967 book To Move a Nation: The Politics of Foreign Policy in the Administration of John F. Kennedy seems to be the first published claim from someone at the center of foreign policy decision-making that President Kennedy would never have committed American troops to Vietnam, and reinforces Daniel Ellsberg's account:


Thus what General Taylor was advocating was essentially the same large-scale American commitment that Vice-President Johnson had recommended. But this did not accord with President Kennedy's own analysis of the nature of what was happening in Southeast Asia. He had read deeply after his tour of the area in 1951, and his comments on the Indochina crisis when he returned had revealed his conviction that if Communism were to be defeated in Asia it could be done only be the force of nationalism. "Without the support of the native population," he said, "there is no hope of success in any of the countries of Southeast Asia." To try to oppose Communist advances "apart from and in defiance of innately nationalistic aims spells foredoomed failure." [p. 423]

Postscript: Some further search brought up an oral history interview with Roger Hilsman from, as far as I can ascertain, the 1990s, which fully confirms John M. Newman's (JFK and Vietnam) interpretation of NSAM 263 as committing the Kennedy administration to a withdrawal of 1000 advisers by the end of 1963 (which in fact took place) and the rest by 1965:


RH: Well, as I say, he went through several stages on Vietnam, you know, I mean he... originally what... you must remember that the very first thing that happened, Ngu Dinh Diem asks for help and so Kennedy sends out General Maxwell Taylor and Walt Rostow to visit the country. They come back and in their recommendation, top secret, is not only do we give them a lot of aid, but we sent ten thousand American troops out there to form a fence, you see, between North Vietnam and South Vietnam. and Kennedy had that stricken from their cable and tried to prevent it from being circulated within the government, American government. I had a fight about that, because I was Assistant Secretary for Intelligence and I was cut out, I wasn't allowed to see it and when I heard about it, I yelled bloody murder but he was determined not to get involved with American troops. No bombing, no ground forces, and so long as he was alive, that was the policy. Then, towards the end of his life, in the fall of '63, he beat McNamara to beat on the Joint Chiefs of Staff to develop a withdrawal plan. At that time, we had only sixteen thousand five hundred Americans in the country, they were not troops, they were advisers and the plan, which was finally approved in the fall of '63, was to withdraw those, all of them. And the only troops... only people we'd have had there would be marine guards, ten of them, for the embassy. Before Kennedy was killed, the first thousand of the sixteen thousand five hundred were withdrawn. If Kennedy had lived, the other sixteen thousand five hundred or fifteen thousand five hundred would have been withdrawn within three or four months.

INT: So you're pretty convinced then that Kennedy wanted to end the war?

RH: It's not that I'm convinced. This was... the documents are there, you see, and I didn't say he wanted to end the war, he said he wanted to withdraw from it. First of all, from the beginning, he was determined that it not be an American war, that he would not bomb the North, he would not send troops. But then after …you remember the Buddhist crisis in the spring of '63, this convinced Kennedy that Ngu Dinh Diem had no chance of winning and that we best we get out. So, he used that as an excuse, beat on McNamara to beat on the JCS to develop a withdrawal plan. The plan was made, he approved the plan and the first one thousand of the sixteen thousand five hundred were withdrawn before Kennedy was killed. If he had lived, the other sixteen thousand would have been out of there within three or four months.

Posted by Gerald Silverberg at 15:34 No comments: