Joint Chiefs Depose Precedent Trump After He Orders Them to Nuke Rochester, NY. Gen. Dunford: “This was an alternative fact too far.” CIB Breaking Fake News! CIB Breaking Fake News, Washington, DC—In a dramatic development, Gen. Joseph F. Dunford, Chairman of the Joint Chiefs of Staff, testified before an emergency session of the Senate Armed Services Committee this morning to explain why the Pentagon deposed Precedent Donald Trump last night.
Gen. Dunford said that among a manic flurry of unpresidented executive orders issued by Precedent Trump recently was one immediately ordering the U.S. Air Force to launch a nuclear attack on Rochester, NY to “eradicate completely from the face of the earth the 3-5 million undocumented ISIS immigrants who had fraudulently voted for Hillary Clinton and were seen celebrating in the streets on election night.”
Dunford explained that, while the Pentagon had been getting inured to the Trump administration’s fast and loose relationship with reality, “this was an alternative fact too far.” He and the other joint chiefs felt bound by their oaths to the Constitution to disobey the order and “put America first.”
In an emotional outburst, Gen. Dunford exclaimed: “The carnage stops here! We were compelled to depose Trump before he crossed the Genesee.”
Gen. Dunlop said that the military and intelligence communities had long been aware of the Precedent’s congenital Alliterative Memory Disorder. But as with Franklin D. Roosevelt’s polio disability, they were confident they could work around these limitations and conceal them from the American public.
The Chiefs did become alarmed, however, when Precedent Trump openly boasted that he was a Russian intelligence “asset” at his unpresidented press conference.
“Alarm bells started ringing,” Gen. Dunford said. “We’ve had our fair share of foreign moles in the government before, but none until now had risen to the presidency. It was unpresidented!”
Gen. Dunford explained that Pentagon analysts had concluded that Trump had ordered the attack on Rochester, NY, because of the homophonic similarity of the town’s name with Raqqa, Syria, the capital of ISIS-controlled territory in the middle east.
“We couldn’t sacrifice thousands of innocent American lives to the cognitive incapability of the Precedent,” Gen. Dunford continued. “While Trump had come to office on an anachronistic but constitutionally legitimate fluke, the Constitution also mandates that we finally take action.”
While Gen. Dunford admitted that it was unpresidented for the American military to seize power, the general assured senators that power would be returned to civilian government as soon as Congress appointed an interim administration.
Gen. Dunford wrapped up the emergency session by only disclosing that Precedent Trump and a “small number of his closest cronies” were being detained at a secret black site until a military commission was constituted to bring treason charges against them. Rochester, NY, top, was narrowly spared carnage by the prompt action of the Joint Chiefs of Staff to depose Precedent Trump last night before he could launch a nuclear attack on it. Bottom: Destruction at Arnhem, The Netherlands, during World War II, was also due to faulty ‘intelligence’ and was the subject of the 1977 movie A Bridge Too Far. Images: Wikimedia
Posted by Gerald Silverberg at 16:32 No comments: 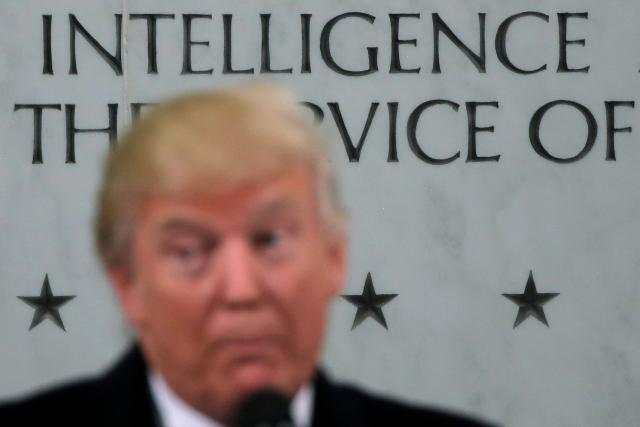 Precedent Donald Trump visited CIA headquarters on Saturday to make hay and pooh-pooh tensions resulting from agency claims that Russia had influenced the erection in his favor and unsubstantiated allegations in the infamous Steele dossier leaked to the press about salacious and possibly treasonous ties between him and his associates and Russian intelligence.

Trump said that his use of the rhetorical question "Are we living in Nazi Germany?" in an infamous Tweet about the leak was meant as a compliment to the agency, not a scathing criticism as reported in the "lying media." Trump said this interpretation was substantiated by his two-Bible oath and inaugural address the day before.

He encouraged the CIA to "keep up the good work," and promised to purge CIA agents who had not voted for him.

posted from Bloggeroid
Posted by Gerald Silverberg at 07:40 No comments:

A Tale of Two Bibles, or: What is that other book Trump is swearing on? But what was that mysterious book in his bedside cabinet?
From a profile of Trump in Vanity Fair by Marie Brenner in 1990 we know that

Ivana Trump told her lawyer Michael Kennedy that from time to time her husband reads a book of Hitler’s collected speeches, My New Order, which he keeps in a cabinet by his bed. Kennedy now guards a copy of My New Order in a closet at his office, as if it were a grenade. Hitler’s speeches, from his earliest days up through the Phony War of 1939, reveal his extraordinary ability as a master propagandist.
“Did your cousin John give you the Hitler speeches?” I asked Trump.
Trump hesitated. “Who told you that?”
“I don’t remember,” I said.
“Actually, it was my friend Marty Davis from Paramount who gave me a copy of Mein Kampf, and he’s a Jew.” (“I did give him a book about Hitler,” Marty Davis said. “But it was My New Order, Hitler’s speeches, not Mein Kampf. I thought he would find it interesting. I am his friend, but I’m not Jewish.”)
Later, Trump returned to this subject. “If I had these speeches, and I am not saying that I do, I would never read them.”


Did Trump read these speeches after all, and brought the book along just in case he forgot anything?
If he had, he forgot that even Hitler knew that Nazi Germany was still dependent on international trade (“does not fully permit Autarkie”). And could it be that in all of the inaugural excitement he also mixed up his family Bible with his bedroom one? Which Bible will it be under Trump: Adolf or Abe?


Posted by Gerald Silverberg at 20:47 No comments: