O tempora o mores! Whether as creditors or debtors, German economists always seem to be angry!

The professor of financial accountability Jacob Soll is just back from a conference in Munich on Greek sovereign debt, and he shares his thoughts on “Germany’s Destructive Anger” with us today in the New York Times.

What are Germans angry about? According to Soll:

But when the German economists spoke at the final session, a completely different tone took over the room. Within the economic theories and numbers came a moral message: The Germans were honest dupes and the Greeks corrupt, unreliable and incompetent. Both parties were reduced to caricatures of themselves. We’ve heard this story throughout the negotiations, but in that room, it was clear how much resentment shapes the views of German economists. 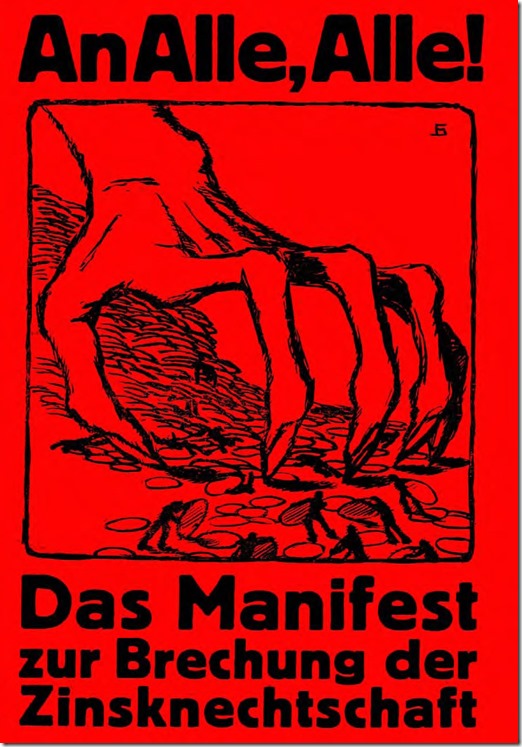 Economists sure knew how to make attractive book covers in 1919. Take notice for your next book on the Greek debt crisis, Hans-Werner Sinn!

Feder attributed all the evils of the modern world to the machinations of financial capital (particularly, of course, Jewish financial capital) and the existence of interest on debt. He inspired the Nazi distinction between productive capital (schaffendes Kapital) and parasitic capital (raffendes Kapital, i.e., banking, stock market speculation), and wanted to do away with the latter by replacing traditional money with “Feder-Giro” money (not to be confused with his contemporary Silvio Gesell’s “Freigeld”).

While he was a big influence on Hitler and Goebbels during the 1920s, when the Nazis actually came to power in 1933 after the Machtergreifung, they reappointed former Reichsbank president Hjalmar Schacht (who had resigned in 1929 because he found the American Young Plan to service Germany’s debt unsustainable—sound familiar?) to the central bank presidency and as minister of economics, sidelining Feder completely. And of course the banks were not abolished (only the Jewish bankers).

Schacht writes about Feder in his memoir Magie des Geldes (The Magic of Money), Düsseldorf/Vienna, 1966, p. 66 (my translation):

The National Socialist propaganda under the direction of Gottfried Feder virulently attacked our entire private capitalistic banking and monetary system. Its slogans were nationalization of banks, breaking of debt slavery, and the introduction of “Feder-Giro” money with the intention of completely destroying our system of money and banking. In order to deflect this nonsense, as Reichsbank president I appointed  a committee of inquiry to draw up proposals for tighter supervision and regulation of banks [...] During several consultations with Hitler I managed to get him to break with the absurd and dangerous banking and monetary ideas of his party comrade.

Evidently, what one thinks about “Zinsknechtschaft” and the unsustainability of debt very much depends on whether one is a creditor or a debtor. Keynes, of course, thought that both should share in the costs of debt restructuring, in the interests of advancing the common good rather than descending into a negative-sum game of vengeance and counterproductive austerity. During the Bretton Woods negotiations he wanted to penalize equally countries that ran current-account deficits and surpluses. The Americans (at least until the Marshall Plan), who in 1944 were the world’s creditors and the world’s trade surplus champions, would have none of this. Evidently the Germans, who today in their part of the world are in a similar position, seem to share this view. They are in no rush to give up their 10%-of-GDP export surpluses for any corrupt, unreliable and incompetent Greeks.

Soll concludes his German anger article with this recommendation to them:

When the panel split up, German attendees circled me to explain how the Greeks were robbing the Germans. They did not want to be victims anymore. While I certainly accepted their economic points and, indeed, the point that European Union member countries owe Germany so much money that more defaults could sink Germany, it was hard, in Munich at least, to see the Germans as true victims.

Here lies a major cultural disconnect, and also a risk for the Germans. For it seems that their sense of victimization has made them lose their cool, both in negotiations and in their economic assessments. If the Germans are going to lead Europe, they can’t do it as victims.

My recommendation to German economists if they want to get their anger under control (for, as we’ve seen, they seem to have major problems in both roles):

Neither a borrower nor a lender be!

And my admonition to Greek Rosencrantz and Guildenstern economists:

The rich ruleth over the poor, and the borrower is slave to the lender.

Posted by Gerald Silverberg at 22:30