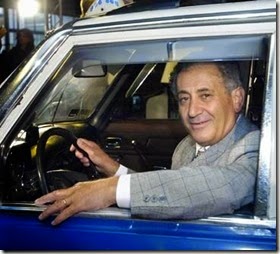 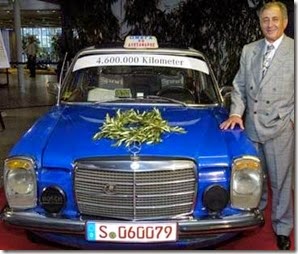 Thessaloniki taxi driver Gregorios Sachinidis sitting for the last time behind the wheel of his record-breaking Mercedes-Benz 240D (4.6 million kilometers!) before donating it to the Mercedes-Benz Museum in 2004 (Pictures: DPA/DPAWEB via FAZ.net).

When I exploited Greek taxi driver Gregorios Sachinidis for my satirical post on the Greek bailout negotiations’ taxi connection/slander recently, I had no idea that Mr. Sachinidis really exemplified the outstanding spirit of cooperation that prevailed between Germany and Greece in the postwar period and replaced the sorry inheritance of World War II (and may be replaced in turn by the current animosity between the two countries). So let me briefly recapitulate his story in this new series I started somewhat sarcastically on Monday with Yanis Varoufakis and his channeling of ancient German battle cries (“Viel Feind, viel Ehr”), in the interests of international understanding (“Völkerverständigung”).

Mr. Sachinidis came to Germany at age 18 in 1963 as one of many “guest workers” from Greece, Turkey, Italy, Spain, Portugal and the former Yugoslavia to fill the labor gap of the postwar German “Wirtschaftswunder.” Fortunately, the powerful German unions had demanded that these “Gastarbeiter” (not to be confused with WWII “Zwangs-“ and “Sklavenarbeiter”) be paid and treated according to the regular collective bargaining contracts and not be exploited as an unprotected secondary labor market (in contrast to the recent trends of European integration). This didn’t mean that they didn’t wind up in the most undesirable housing at the margins of German society. Nevertheless, millions stayed on and benefited from the superior job opportunities Germany had to offer, sent their kids to German schools (from which many emerged as members of parliament and ministers), and largely integrated into this new and alien society.

Others, like Mr. Sachinidis in 1978, eventually returned to their home countries and invested their hard-won savings in new businesses. After 1981, when Greece first permitted Diesel taxis, Mr. Sachinidis saw his chance, and with the assistance of his brother, who had worked at Mercedes-Benz, managed to locate in Germany a used 240D, his dream taxi, and import it to Greece (being used, its deleterious effect on the Greek balance of payments was undoubtedly fairly minor). The rest is Guinness Book of Records history (not to mention that the 240D played a decisive role in impressing his fiancé enough in 1983 to marry him).

In the twenty-three-year taxi lifetime of his 240D Mr. Sachinidis proudly chauffeured such dignitaries around as German soccer star Gerd Müller (who we trust he did not overcharge) and transported humanitarian goods almost four hundred times to war-torn Serbia.

After donating the 240D to the Mercedes-Benz Museum, Mr. Sachinidis received a new C200 CDI from Alexander Paufler, president of Daimler Chrysler Hellas (after unfortunately committing the “faux pas” of having bought a French Peugeot as its replacement). Truly a heartwarming story of successful European solidarity!

Personal footnote: During the late 1970s, while a student at the University of Tübingen, I spent three summers building the successor model to Mr. Sachinidis’ 240D, the W123 series, at Mercedes’ main assembly plant in Sindelfingen. The amusing tales of industrial relations and Modern Times assembly-line surrealism will be, hopefully, the subject of future posts. 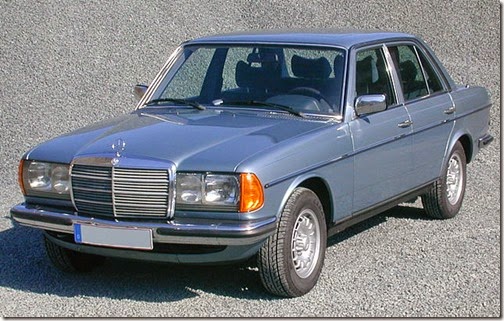 The successor model to Mr. Sachinidis’ 240D, the W123 series, of which I have fond memories from both the insides and outsides. (Picture: Wikimedia Commons) 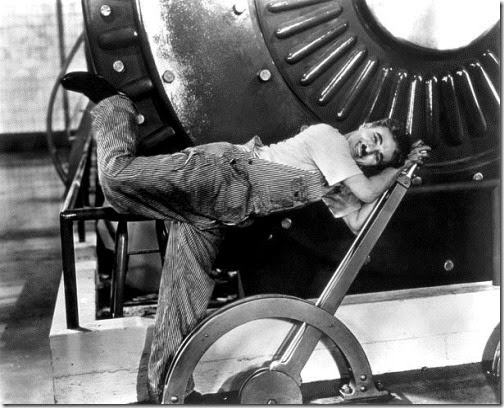 A rare picture of me at the Mercedes-Benz plant in Sindelfingen, enjoying my summer vacations from studying economic complexity. (Picture: Wikimedia Commons)

Posted by Gerald Silverberg at 12:32