From Game of Turkey to Rock-Paper-Scissors: Musical Turkey for Greece?

With the Greek debt negotiations moving into their final genuinely unavoidably ultimate showdown this week, the game has incremented to a new and unprecedented level. Having started as a game of chicken (irresponsible brinkmanship), it quickly moved to what I called a game of turkey (second round postmortem blame game). This week, however, it has bootstrapped itself to yet a higher level: a three-way round-robin between Greece, the Eurogroup, and the IMF reminiscent of the famous rock-paper-scissors game dear to both children and game theorists. 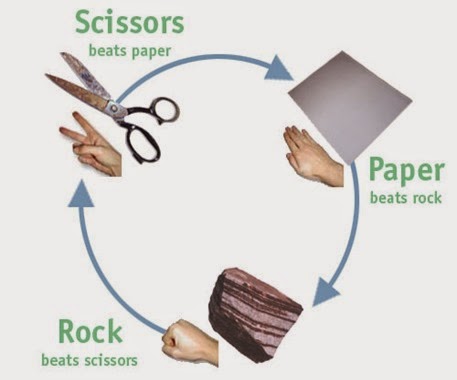 Has the Greek debt game evolved to the next level: rock-paper-scissors between Greece, the Eurogroup, and the IMF?

First, why do we think the game has moved into its ultimate round (after previously predicting April 9, wrongly, as the moment of truth)? On May 12 Greece is scheduled to repay SDR 600,737,500 (around €763 million) to the IMF (after repaying SDR 157,331,282 on May 1). Since the Greek government, after plundering the cash reserves of various central government agencies to meet its last April 9 repayment, is now attempting to force all municipalities to transfer their cash balances to the Greek Central Bank, it must really be desperate and at its wit’s end (moreover, major cities like Athens have refused to comply).

But on Monday the Financial Times reported that the IMF is now insisting that any loosening of Greece’s primary surplus target (variously quoted as 3 or 4.5% depending on source and target year) be preceded by an explicit write off of Greece’s debt to be consistent with the IMF’s mandate to only bail out countries’ with sustainable sovereign debt loads.

Meanwhile, Pierre Moscovici, the European commissioner for economic affairs,  according to yesterday’s FT, now says that any discussion of debt restructuring can only take place after a program of reforms is first agreed with Greece. And Greece, in turn, has all along claimed that any reforms (with or without red lines) cannot be agreed until the primary surplus target is relaxed. Voila: paper-rock-scissors, or a European Catch-22! How this even more intricate impasse can be resolved is now anyone’s guess.

Needless to say, while this stalemate grinds on Greece’s growth and revenue prospects have only been rapidly deteriorating. 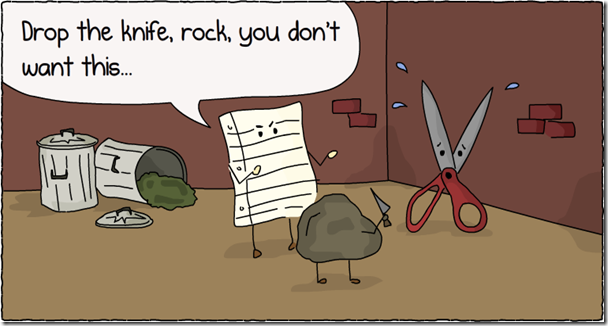 Have the Greek debt negotiations degenerated into a three-way standoff?

Posted by Gerald Silverberg at 08:08