The Welfare State Perpetuum Mobile: Is Greece Reinventing the Clientelist Wheel (aka the Circular Flow)? 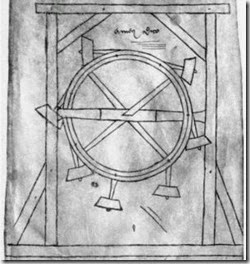 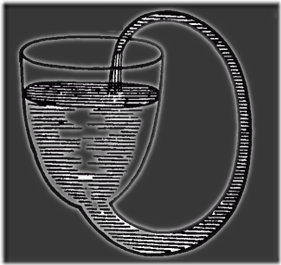 Yesterday’s Financial Times brings us more astonishing updates on Greece’s game of musical turkey: “Greece overturns civil service reforms.” One of the notorious “structural reforms” that all previous governments had agreed upon with the hated “troika” was to slim down Greece’s notoriously overstaffed and highly inefficient state bureaucracy (a bureaucracy which, like Italy’s, may actually reduce economic growth by creating unnecessary layers of red tape to justify its own parasitic existence). Now the Syriza coalition wants to reinstate thousands of dismissed civil servants and public broadcasting employees (including the famous finance ministry cleaning staff):

The latest Greek law calls for the rehiring of about 13,000 civil servants whose jobs were cut in an overhaul of public administration agreed by with bailout lenders by the previous Greek government. It also eliminated annual evaluations for civil servants and promotions based on merit. …

Kyriakos Mitsotakis, who — as the previous government’s minister for administrative reform — implemented past cuts, said Syriza’s legislation marked a return to the clientelist practices of the past.

As someone sympathetic to Greece’s current plight and fully aware that mass dismissals and wage cuts during a recession may be self-defeating from both the perspectives of overall economic activity and state finances, this news still gives one as an economist pause for thought. For it reveals an underlying philosophical attitude widespread among many leftists that, via government employment and generous pensions, the welfare state simply creates the income that it can subsequently tax to finance these payments in the first place. After all, the economy is just a circular flow (your expenditures are my income), and thus a generous welfare state should be in a position to bootstrap its way to an economic pepetuum mobile. No actual production or exports necessary! I became painfully aware of this after attending a discussion with Katerina Notopoulou, a member of the Syriza central committee, at the Kreisky Forum recently in Vienna. There I heard the astonishing statement that the Greek government needs to pay higher pensions so that pensioners can pay taxes (to in turn finance their pensions). While Ms. Notopoulou is a psychologist actively and commendably involved in cooperative initiatives to help citizens denied health insurance, and not an economist, this really does smack of a utopian leftwing welfare state perpetuum mobile.

Now don’t get me wrong here. I am no Tea Party fanatic who thinks that all government activity is parasitic on the “real” economy and must be eliminated. It is clear that well-designed government regulation, “night watchman” functions (police, legal system) and the provision of public goods (education, R&D, health care…) are absolutely essential for the efficient running of a modern economy. Still, this perpetuum mobile perspective is very much at odds with what one can call the “biophysical” perspective on economics: that economic activity is really a one-way flow from nature, via the productive process employing human and machine labor, to economically valuable output and wastes. And that the monetary circular flow we observe is ultimately powered by this one-way flow just like a rotating water wheel is powered by the flow of its underlying stream. But self-powered closed-circuit water wheels, aka perpetual motion machines, I thought, are impossible, even in leftwing economics. 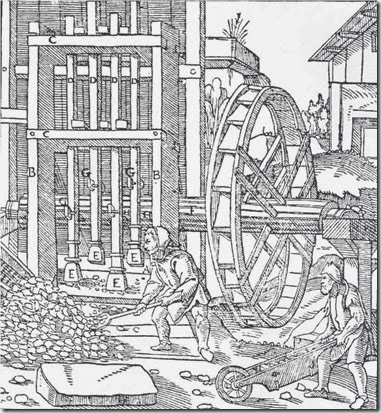 A rock-crushing mill illustrated by Georgius Agricola's De Re Metallica (1556). Water enters at the top and exits at the bottom, powering the overshot wheel where, in junction with human labor, it crushes valuable ore-bearing rocks for further processing. This is an irreversible process even if the wheel is in constant circular rotation. For a good animated illustration of a returning water wheel in which the water to pumped back to the top to start the process again, see the Science Museum’s Old Bess returning Watt engine. This is not a free lunch because the steam engine must irreversibly consume coal to pump the water back. Returning engines were used during the early Industrial Revolution because water wheels provided more uniform circular motion for factories than the first steam engines could provide.

Moreover, an open economy like Greece that needs to import most of its essential commodities like energy, automobiles (remember Gregorios Sachinidis’s Mercedes 240D!) and pharmaceuticals, can only pay for them by exporting something of value to foreigners like tourism or shipping services (Greece’s two biggest exports)—unless of course the hated “troika” suddenly becomes willing to write them a blank check into the indefinite future.

So, as much as I agree with Greek Finance Minister Yanis Varoufakis that Eurozone austerity policies towards Greece have proven self-defeating and need to be thoroughly rethought, left-wingers like many influential members of Syriza still need to get real. Greece, despite the most radical internal devaluation of any Eurozone country, has a major export problem and desperately needs to find ways of putting its population back into gainful employment besides featherbedding the public employment rolls and electoral pandering to pensioners. (I reserve judgment whether the restoration of public broadcasting in some form is justifiable.) 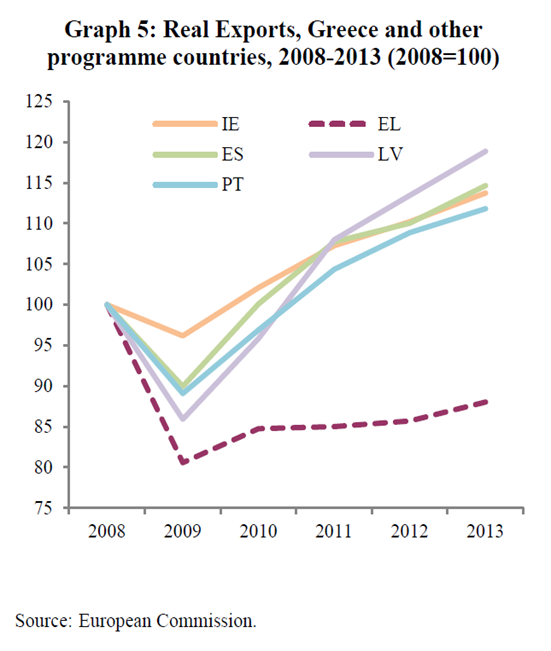 Posted by Gerald Silverberg at 12:35