The Krugman Twin Paradox (with Apologies to Albert Einstein!)

I posted my PINE-UCM slides yesterday around noon (Central European Summer Time) based on a talk I gave the evening before to undergraduates that attempted to break a lance for the centrality of multiple coordination equilibria, nonlinear dynamics, network and complexity theory in economics and finance. This is something I have been thinking about for a long time (see my 2010 presentation at the INET Budapest ‘Alternative Macrodynamics’ conference, available as a pdf file here). And of course I don’t claim to be the first person to think along these lines.

Then I took a train to Berlin, arriving around midnight, and checked my ‘usual suspects’ websites before going to sleep. And low and behold Paul Krugman had, in the meantime, coincidentally written a blog diatribe precisely on the subject of multiple equilibria and nonlinearity, apparently triggered by recent articles by Frances Coppola and Wolfgang Münchau (only the second of which, in Monday’s Financial Times, I had already seen—and don’t forget the Umlaut in his name!).

Of course it’s facile for non-card-carrying economic kibitzers to poke fun at the academics. And while I avidly and appreciatively read Wolfgang’s comments in both the Financial Times and SpiegelOnline and subscribe to his main points about multiple equilibria and nonlinearity, he really does not give any compelling substantive arguments for his claims. Both Coppola and Münchau seem (at least to professional economists) to be indulging in just armchair hand waving, at taking cheap shots. But why Paul Krugman should be so personally piqued by this discussion is puzzling.

His argument seems to boil down to essentially two parts:

True! In spades! In fact, Paul Krugman received the Nobel Prize precisely for his work in new trade theory and new economic geography, which also uses multiple equilibria and nonlinearity as central tools (nice bifurcations there, Paul). Something that in his modesty he doesn’t even mention in his diatribe. As have many other well-known, reasonably mainstream economists, such as Diamond and Dybvig on bank runs, as he points out. In my lecture I go even further back in time to Nicholas Kaldor’s 1940 Keynesian trade cycle model, and return to the present for Paul de Grauwe’s recent work on the dynamics of the Euro crisis. No argument here.

2. “That kind of stuff is too easy and too much fun”

Whoa! Since when were “easy” and “fun” incompatible with good science and now are a mark of opprobrium? Maybe it was too easy to generate spurious chaos models in the 1980s when it became clear how trivial it was to do with simple one-dimensional nonlinear discrete-time dynamics (remember the logistic equation?). But after that fad subsided, no serious scientist had any doubts that nonlinearity was of critical importance in lots of different fields (and why should economics be an exception?). Multiple equilibria (and even more complex dynamical regimes like limit cycles, chaos, and self-organized criticality) were shown to be certainly possible and important in an increasing number of domains. And this can be hard work, both theoretically and empirically (not that this is an essential criterion), not just idle fun and games for playful graduate students. So what’s going on here to turn Krugman against his own roots and better judgment? Fear of being flakey?

This does look like something that can only be explained by his psychoanalyst (in the unlikely event that he has one). Paul goes on to describe his own intellectual development:

And in my case, at least, I ended up with the guiding principle that models with funny stuff should be invoked only when clearly necessary; you should always try for a more humdrum explanation.

Well, I have no problem with Occam’s Razor, nor does any other scientist I know. If Paul can make sense of the present crisis using a simple, one-equilibrium IS-LM model augmented with a nonlinearity at the zero lower bound of interest rates, more power to him (and his prediction that inflation would be tame there despite the monetary expansion of the central bank seems to have been entirely on the mark until now). But if everyone was always a priori allergic to “funny stuff,” we would never have gotten relativity theory, quantum mechanics, or even the heliocentric theory of the solar system. So what gives? Are we now confronted with a multiple personality Paul Krugman who rejects the excesses of his youth? Who after going into orbit in the academic, journalistic and political worlds returns to the earth and now is an intellectually different person from the scientifically progressive twin personality he left behind (in analogy to the famous Einstein twin paradox)? 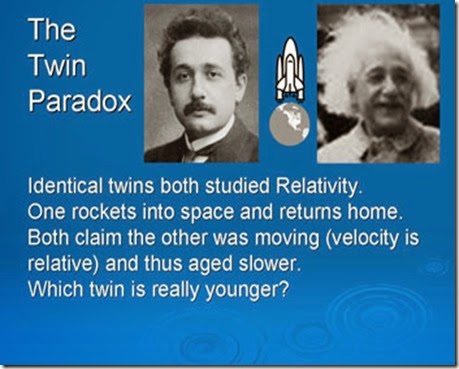 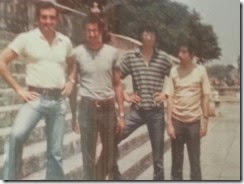 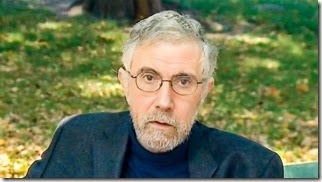 Paste together your own Krugman Twin Paradox by inserting the two bottom pictures into the Einstein Twin Paradox template above (left: PK, exceptionally, on extreme right with an 1976 IMF delegation in Lisbon; right: PK in an interview with ABC television in 2014). Replace the word “relativity” with “macroeconomics.”

Coming up: Multiple equilibrium models—do they really make any difference at the zero lower bound, or are they just Hicksups?

Posted by Gerald Silverberg at 16:49