George Dyson points out at Edge that the purpose of intelligence is not just to collect signals but ultimately to understand what people are thinking:


The ultimate goal of signals intelligence and analysis is to learn not only what is being said, and what is being done, but what is being thought. With the proliferation of search engines that directly track the links between individual human minds and the words, images, and ideas that both characterize and increasingly constitute their thoughts, this goal appears within reach at last. "But, how can the machine know what I think?" you ask. It does not need to know what you think—no more than one person ever really knows what another person thinks. A reasonable guess at what you are thinking is good enough...

There is one problem—and it is the Decision Problem once again. It will never be entirely possible to systematically distinguish truly dangerous ideas from good ones that appear suspicious, without trying them out. Any formal system that is granted (or assumes) the absolute power to protect itself against dangerous ideas will of necessity also be defensive against original and creative thoughts. And, for both human beings individually and for human society collectively, that will be our loss. This is the fatal flaw in the ideal of a security state.

Our 'Creditanstalt' intelligence bureau has just learned that in view of the insurmountable computational complexity of this problem, the NSA has decided to abandon its controversial PRISM program, which was drowning in unfiltered taps of narcissistic Facebook pages and free-association Skype chats, and replace it with the SWIFT program, inspired by Jonathan Swift's 1726 classic Gulliver's Travels.

In Part III A VOYAGE TO LAPUTA, BALNIBARBI, LUGGNAGG, GLUBBDUBDRIB, AND JAPAN, Gulliver encounters surveillance scholars well in advance of the NSA:


Another professor showed me a large paper of instructions for discovering plots and conspiracies against the government.  He advised great statesmen to examine into the diet of all suspected persons; their times of eating; upon which side they lay in bed; with which hand they wipe their posteriors; take a strict view of their excrements, and, from the colour, the odour, the taste, the consistence, the crudeness or maturity of digestion, form a judgment of their thoughts and designs; because men are never so serious, thoughtful, and intent, as when they are at stool, which he found by frequent experiment; for, in such conjunctures, when he used, merely as a trial, to consider which was the best way of murdering the king, his ordure would have a tincture of green; but quite different, when he thought only of raising an insurrection, or burning the metropolis.

The NSA has now commissioned studies of Osama bin Laden's stool recovered from the Navy Seal's mission to Abbottabad to serve as a benchmark for a worldwide program of excremental analysis to unmask potential terrorists with their pants down.

The NSA now proposes to fire its thousands of mathematicians and computer scientists and replace them with low-wage medical laboratory technicians rendered unemployed by the ongoing Great Recession (this is the real reason Edward Snowden decided to get out of the business now). 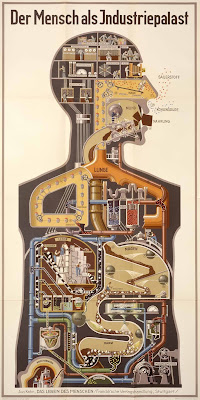 NSA's current PRISM program (left, in slides revealed by Edward Snowden) has proven computationally intractable, and will be replaced by cutting-edge science about human neuro and gastrointestinal physiology (right).

Once again, Jonathan Swift has proved to be a thinker well ahead of his times. As we have previously pointed out, his A Modest Proposal has also been one of the few effective policies for the resolution of the Euro crisis, inspiring the troika's program of structural reform in the Eurozone periphery by transferring superfluous babies to core countries to bolster biofuel production and rebalance competitiveness.

Posted by Gerald Silverberg at 12:33