USA vs. Eurozone: How Many Differences Can You Spot Between These Two Pictures? 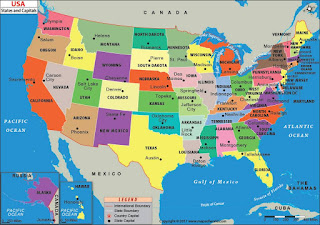 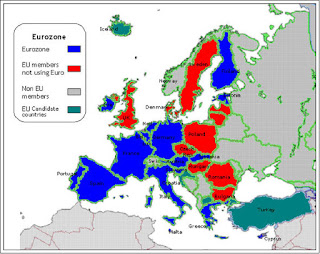 How many differences can you spot between these two pictures?

George Soros and Hans-Werner Sinn have been at each other again at Project Syndicate (see my previous two posts on this debate).

While Soros pleads for debt mutualization in the form of Eurobonds as a necessary (but possibly insufficient) condition for Eurozone stability, Sinn reiterates that this is not legally possible under German law nor corresponds with Germany's original intentions in agreeing to the Maastricht Treaty.

I just want to briefly mention a different point Sinn brings up in which he betrays a serious gap in his knowledge of American history and that country's experience with its currency union (otherwise known as the US Dollar, the longest running successful currency zone in history). The first US Treasury Secretary, Alexander Hamilton, mutualized the 13 state debts left over from the Revolutionary War and established the US National Debt based on centrally levied tariffs and a whiskey tax. Many observers have argued that the Eurozone must also go through its "Hamilton moment" before it can graduate to a fully functioning currency zone.

Sinn claims, in contrast, that

George Soros underestimates the risks that debt mutualisation would pose for the future of the eurozone. When Alexander Hamilton, the first US finance minister, mutualised state debts in 1791, he thought this would cement the new American nation. But the mutualisation of debt gave rise to huge moral hazard effects, inducing the states to borrow excessively. A credit bubble emerged that burst in 1838 and drove most of the US states into bankruptcy. Nothing but animosity and strife resulted.


This is a very curious statement, since the US currency zone, when I last looked (and the Republicans hadn't played chicken again with the debt ceiling, their symbolic legislative blackmail weapon), was still going strong after over two hundred years, its creditworthiness still intact, and no Federal state now has a debt burden over 19% of its GDP. 75% of US public debt is Federal, not state, supported by a 19% central government revenue rate on GDP. In the Eurozone, less than 1% of GDP is collected by Brussels as taxes, and there is no central sovereign debt (except for a minor amount issued by the European Investment Bank) but 17 national sovereign debts (not counting the EU countries not using the Euro). In other word, the US is a model of a functioning currency union, while the EU is still stuck in a time warp around 1791. Have "most US states" ever been driven into bankruptcy, and has this been a source of "nothing but animosity and strife"?

A good source of data on US state defaults is at LearnBonds. The first state defaults were in 1841 (9 in all, not "most states", and not 1838), 50 years after Hamilton created the National Debt (the Euro should live so long!), the last in 1933. There was also a wave of six defaults of defeated Southern states after the Civil War in 1870. That's it. Nothing like Sinn's "animosity and strife" (the Civil War was not fought about the 1841 default wave, by which time the problems had already long been repaired). So we are really only talking about the default wave of 1841.

A good paper on this episode is "Debt, Default, and Revenue Structure: The American State Debt Crisis in the Early 1840s". The authors conclude that


It has become increasingly clear that a currency zone can only function with mutualized sovereign debt supported by a central fiscal and tax structure, and a banking union (the latter something the US only really introduced in 1933 with Federal deposit insurance - before that the US was subject to recurring massive bank runs). Paul de Grauwe, Europe's foremost expert on currency zones, has just restated the case for a European Hamilton Moment at Project Syndicate.

Sinn is within his rights to reject this solution, but then Soros has a point that Germany should be consequential and leave the Eurozone if it can offer no better constructive solution. But Sinn should not invoke a caricature of American history to repeat ad nauseam the strained shibboleth of moral hazard (an important issue) to justify his solution: 20-30% debt-deflation in the EZ periphery, or, as we Americans remember from the Vietnam war, "we had to destroy them to save them."
Posted by Gerald Silverberg at 10:43