In the justified hullabaloo about Herndon, Ash and Pollin's  (HAP) demolition of  Reinhart and Rogoff's (RR)  AER P&P and NBER/JEP "Growth in Time of Debt," it hasn't been remarked that even if RR had made none of the absurd and elementary errors that they have now been shown (wittingly or unwittingly) to be guilty of, their main result - that there is a "debt cliff" at 90% - is statistical nonsense.

RR employed a very crude statistical technique for analyzing their observations of country pairs of debt ratios and growth rates - they binned them into just four categories of debt (0-30%, 30-60%, 60-90%, and 90% to infinity) and then computed growth rate averages for each bin (also using a very idiosyncratic weighting procedure, as HAP show, besides leaving out important data points). Notice that the size and number of bins is arbitrary. They could have used 100%, 150% or even 200% as their upper bin boundary, and 5, 10 or 20 bins to determine resolution. The upper bin boundary at 90% is taken completely out of a hat.

Thus, even if their result had been correctly calculated (which it wasn't), their erroneous finding that the mean growth rate for debt levels greater or equal to 90% was almost 3% lower than for debt below this level (in fact, it is only about 1% lower by HAP's reckoning), would be consistent with


HAP have nice figures plotting all the observations and drawing a completely smooth and remarkably slowly varying relationship between debt and growth (and additionally demonstrating how much variance there is in the dataset): 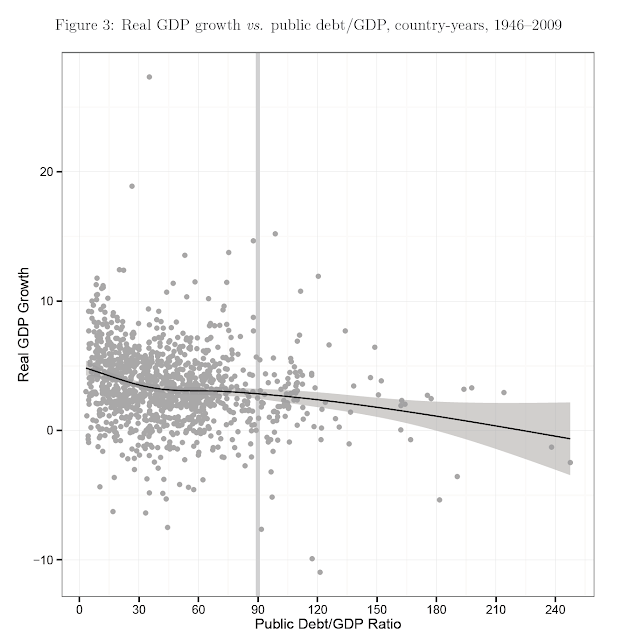 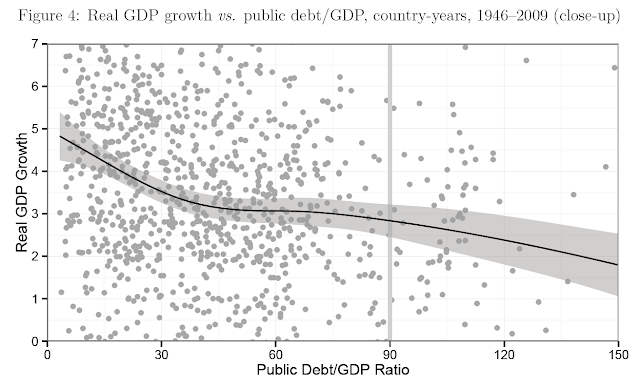 Do you see any dragons here?


[Postedit 27 May 2013: For final summing up of these issues, see post Reinhart-Rogoff vs. New Zealand: Final Round?]
Posted by Gerald Silverberg at 09:29