Greasing the Way for the Merkel-Putin Pact (Or Who Says History is Bunk, Part ?) 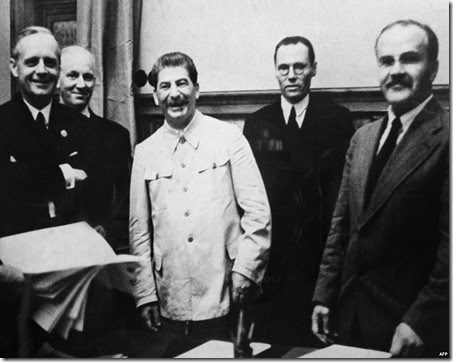 The Molotov-Ribbentrop Pact was all smiles in 1939 (“such methods were part of foreign policy at that time”) until Stalin found himself with his back against the wall in June, 1941.

Vladimir Putin’s recent remarks on the irreproachability of the 1939 Molotov-Ribbentrop Treaty (see also FT.com report) between the Soviet Union and Nazi German (aka the Hitler-Stalin Pact) underscores his desperate drive to reach an accommodation with Germany after the crisis triggered by the annexation of the Crimea and the destabilization of Eastern Ukraine. With the ruble now in free fall, weak oil and gas prices, Western sanctions, and a costly stalemate in the Ukraine, he apparently needs to pull more than a domestic patriotic rabbit out of the hat to prevent disaffection with the souring Russian economy.

Readers of this blog will recall that the Creditanstalt Intelligence Bureau as long ago as March 20 identified the coded olive branch Putin extended to Germany in his Crimean annexation speech. The CIB also identified the goal of this initiative on April 7: a Merkel-Putin Pact restoring lost territory to Germany (Königsberg and Polish Pomerania and Silesia) in exchange for recognition of Russia’s Ukrainian annexations and the guarantee of strategic trade of Russian gas and oil against German machinery and cars.

In a gradual campaign to remove the opprobrium such a pact would incite, Putin has begun to relativize the infamy with which the Molotov-Ribbentrop Pact has hitherto been regarded by both Western and Russian historians. This is all the more astonishing when one recalls that, quite aside from the morality of the secret protocols partitioning Poland, the Soviet Union continued to supply Nazi Germany with the essential raw materials and food it needed to mount surprise attack Operation Barbarossa right up to the end on June 22, 1941, long after the Nazis had begun reneging on their part of the agreement. In Putin’s own words, such methods were part of foreign policy at that time, a statement that may come back to haunt him. 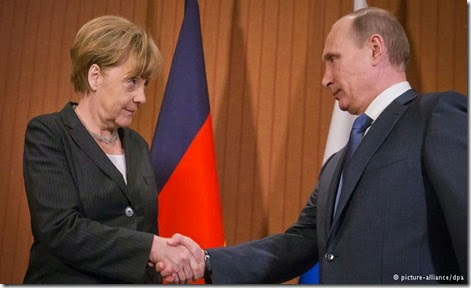 Who will be smiling for how long should a Merkel-Putin Pact be in the offing? (Picture source: Deutsche Welle)

Posted by Gerald Silverberg at 14:36